This week the pack huddled up for warmth at the Crepe Place. The night was so cold, wet and dark, Banana Basher wore his big fur hat along with a bright red sweatshirt. This storm had come down from Alaska, but it looked like it had blown some commie Russki bear in along with it. Guess you really can see Russia from Alaska! Weather be damned–no matter how cold it gets, Puff the Magic Drag Queen will be rocking the OP shorts. Except this week, they were not cords! WTF? Was it laundry night and all 73 pairs of his OP cords had skid marks? 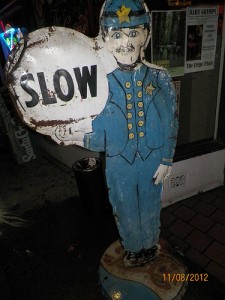 The hares dashed off into the cold night as the pack lollygagged in the warm wood-paneled bar of The Crepe. When we finally tore ourselves away to circle-up outside, we all met Virgin Victor. Hare Shiny Snail Trail had brought him, then ditched him in the kennel with us hounds. He was strictly advised against following dBASED, mainly because we knew he would be led astray and we would all be left wondering, “what’s your vector, Virgin Victor?”

Much of the trail zig-zagged the hood between Seabright and Frederick St. There were lots of checks used as strategery to keep us suspiciously wandering around in the darkness. As if this neighborhood needs any more prowlers… 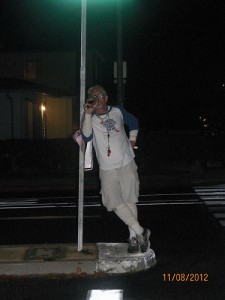 Booze check was in Star of the Sea Park. I must say, now I know why AccuPrick was bragging about his hooch checks. That was some damn smooth fine rye whiskey! TIMMY!!! didn’t want a drop to go to waste, so he snatched up the bottle and stumbled along with it. After a couple of blocks and a few more swigs, he was too unsteady and Thmp-Thmp had to take on the next leg of the rye relay. Thmp bolted into Frederick St. Park and kept on going. He somehow resisted the urge to settle in with the hobos along with the bottle.

Not far past the park was beer check in a random little woodsy spot between Fred St. and the yacht harbor. Thmp pulled out the bottle and passed Puff a swig. Puff shrugged “rye not?” and we all took a guzzle or two. It was so dark there somebody had to spark a bowl just so we could see our beers in front of our faces. The kind glow also helped us spot the short-cutters (hello, My Little Bony and Banana Basher!) so we could give them a good lambasting.

Back on trail, we cruised by the cannery and then crossed Seabright. By this point we were thirsty again, gave up on trail and headed directly to Puff’s castle. What the hares didn’t realize was that their trail was a re-visit of trail #654 in reverse. Been there, drunk that. And we’ll drunk it again!

As the hounds trickled in for their down downs, Shiny Snail Trail personally surveyed each of us for opinions about her first trail. Hmm…lemme think a minute…oh, yeah…IT SUCKED! 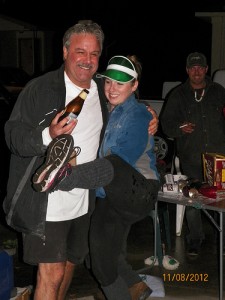 Hare AccuPrick did double-duty as RA and chose Deep Stroke as beer fairy. The rain suddenly started up again, we all sardine-canned it into the garage, and the down downs commenced in earnest. Backsliders/stool warmers Hairy Potter and Choka Cola were not spared, even though Choka’s now got a baby under construction. Only Hairy was called up for a down down because now he’s drinking for three. Represent! We learned Tiny Whiny Bitch is moving to Washington to smoke pot and get same-sex married, cuz that shit’s legal there now. Hugh Heifer may be in line to go right behind him! It was Tiny Whiny’s 100th run analversary. He was celebrated by being forced to wear the hashit vest. We also learned that dBASED had cut trail (like he ever doesn’t) and snared the hares near the cannery. Snail Trail wrote him a petulant poem because she was pissed. And piss drunk. She then literally took a spill into the beer altar while spreading her eagle with a high kick, almost losing her visor/cum deflector in the tumble. Speaking of spreading eagles, Virgin Victor was a real tease. I was pretty sure we were going to see his cajones, but we only got half of a culo. And the hares…

You’ll have to check out the Hash Flash to get an eyeful of on on on. I didn’t go, but there were definitely shenanigans and maybe even some high jinks. 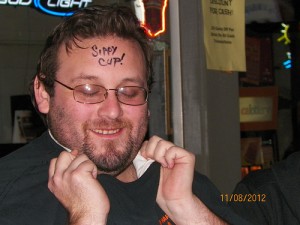 Next time we’ll be coagulating at the Trout Farm Inn, Felton. Shallow Hole and Deep Stroke will take us on a dark mountain adventure. Bring a flashlight and wear something reflective so the wild animals can get a good look at which one of us might be the tastiest.