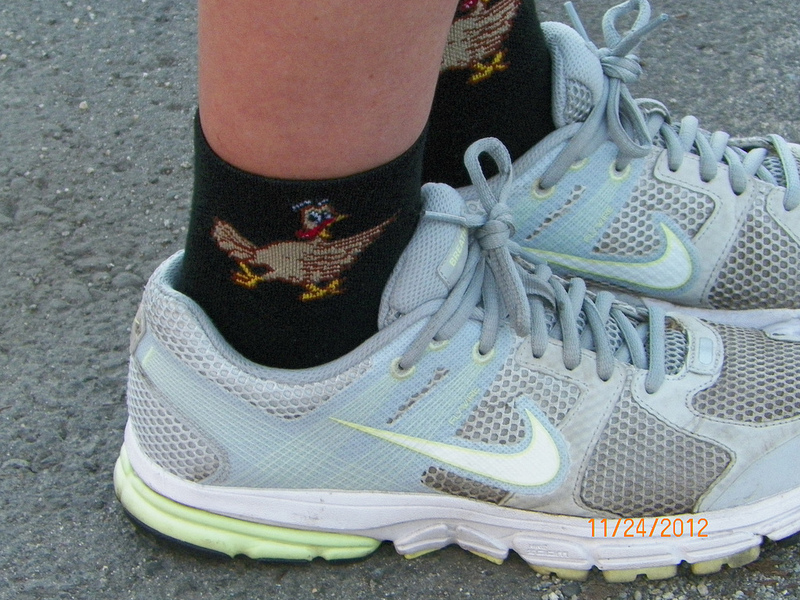 Thmp-Thmp, Virgin Marna, and I woke up with a mission at dawn in Oregon at Dad’s house the Saturday after Thanksgiving. We hugged our goodbyes and hauled ass back to SC, just so we could make it to our other dysFUNctional family holiday gathering with you all. The turkey had been stuffed, the turkey baster had blown its load, and now this little flock of turkeys had the trots. We couldn’t wait to stretch out our drumsticks after the 7-hour car ride.

I busted through the swinging doors of the Over the Hill Gang Saloon with finger pistols blazing, trying to start a “shootout” with Banana Basher. But his hands must’ve already been busy playing pocket pool. The few regulars barely flinched at being invaded by all us city slickers. They were already in an afternoon stupor from the cheap drinks–especially Josiah, a random jovial drunkard who could barely stand or say much except for his own name. Nonetheless, he wanted to come run with us!

Our over-eager hare, Puff the Magic Drag Queen, scheduled himself to take off at 3:15 and have the flock give him a 5-minute lead. (When the FRB caught Puff, he or she would become the hare, receive a trail map and get a 5-minute lead. And so on and so on—haring relay style.) That turkey tosser screwed us all and took off at 3:12! The flock finally fell in line and hit the trotting trail. Random Virgin Josiah stumbled along with us for about a block and then disappeared. Did he fly back to the saloon? Did he pass out in a gutter? Did he suddenly remember there was leftover pumpkin pie back at his nest?

Some of us were hoping for a nice long stuffing-burner of a trail. After being cooped up and overfed through the holiday, we were ready to shake a tail feather. The hare led us across Portola Drive and into a trailer park. It was on left at 38th Avenue and on right down the railroad tracks. Another right at 41st Avenue led down the street to a back check. Time to spread out and explore. We’d only jogged a few blocks and now our flock was already crossing our third busy street like kooky quail. Virgin Marna showed her (questionable) worth and solved the back check that led down an alley. We popped out on Portola again and…you guessed it…had to cross. I was starting to wonder if Puff was trying to pick off the flock as roadkill. Luckily, we all survived and flocked together for beer check at Suda. 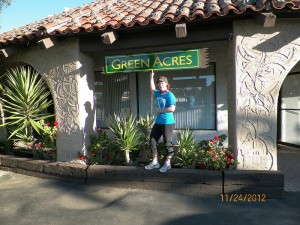 Whatever Puff lacked in trail ingenuity, he’d made up for with speed. Even with his little 5-ish minute lead, nobody could catch Puff. That leftover hangover clearly had a hold on us. Not only was Puff trying to kill us off with traffic, he’d tortured us by preventing us from working off our Thanksgiving guts. It was Surf City’s second short trail in a row. We were all glad to see Just Mike had returned for his second hash, but the poor guy must think we only do super short pussy trails. Since GPS master dBASED was absent, we will never know exactly how short this trail was (or at least how short his completely different version of it would’ve been). It was definitely a shorty because Brokebench Mountain’s pleasantly plump dog Porter finished the trail just fine. On the plus side, trail was indeed long enough for Deep Stroke to tour two 4:20 dispensaries along the way. Hope she scored some samples for Hugh Heifer!

AccuPrick was spry enough to run even though he said his liver was heavy. Maybe it was heavy, fully saturated livers that kept us from catching Puff! Yeah, that’s the ticket! Banana and Cuff My Muff rolled in a bit late to beer check because they’d been chasing some dude who they thought was Accu over to the cliffs. Accu denied being that dude so Banana said, “it must’ve been some other good looking guy.” Uh, get a room, guys.

Shallow Hole and Grassy Ass also rolled into beer check late after being no-shows at the start. Okay, Shallow Hole drives a red hot rod, how did she manage to be late?? Grassy Ass had lost track of time while shopping for red dresses like a good little hasher boy. Backslider Bloodweiser showed up late, too. I had to cover the hash cash duties this week because the hare was busy doing other stuff, like leading us along his puny sorry-ass trail. Bloodweiser didn’t want to fork over his hash cash so he could keep his $1’s for $tripper$. I said if he stripped for me, I’d give him some back. Suck Cockran, Bailas Con Burros and Twat Did You Say? also made it out for the Turkey Trot foolery. These Saturday hashes sure are great for bringing out the wankers—the new, the seasoned, and the ones who are so jobbed/schooled up they never cum on Thursdays.

Puff cut us off at Suda and we headed down Portola to a parking lot across from the saloon for religion. I guess some folks were still in a gobblin’ mood because the Ritz and Easy Cheese hash dinner was a BIG hit! When the squeeze cans finally ran dry, down downs began. AccuPrick RA’d and Suck Cockran beer fairy’d. Deep Stroke claimed to have had the worst Thanksgiving. She went to Chaminade! ☺ …but had to spend it with her family. ☹ Wicked Retahted rolled a joint but forgot to bring it. No surprises there. Twat Did You Say? was punished for being a backslider smartypants due to taking Thursday night classes at SJSU. She’s studying to be a mean school principal lady. We all toasted Grassy Ass for being a return visitor from San Diego. Yay, we haven’t scared him off yet! We also toasted the newbies, Virgin Ron who came with Puff and my sister Virgin Marna. They both told jokes their mothers should be both proud and ashamed of. Twat called out Porter for shitting on trail and Brokebench for not scooping the poop. 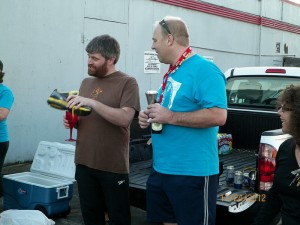 Bloodweiser’s suspiciously new-looking shoes were submitted for a sniff test. They reeked, so they passed (failed?). Speaking of footwear, Cuff’s “new pair of FiveFingers” sure looked an awful lot like flip flops. Yep, the girl turkey trotted in flip flops. Waxi Pad had the honor of DFL as he rode in on a bicycle. WTF? His wife, Shallow, drives a hot rod and showed up late, now he rides in last on a bike? I just don’t get those guys. And the hare…

After religion, as I counted the hash cash, Brokebench drove off and returned with a bag of Porter’s offending dog shit and chased Twat with it. Totally gross, but didn’t seem to ruin anyone’s appetite as we headed to Mountain Mike’s Pizza for on on on. Schlong Division porked out on a pizza of bacon and ham. Deep Stroke says she only eats vegetarian pizza…unless there’s meat on it. She also wore her old hasher dog tag that says she only drinks Michelob Lite. Ha!

May the hash digest in peace.