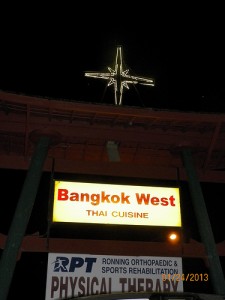 This week the pack traveled to Aptos to Bangkok West Thai Restaurant.   Luckily the rain finally stopped and it wasn’t a cold night.   Thmp-Thmp had a cooler of beer in his car and as hashers arrived, they chose to hang out in the parking lot, rather than go inside the restaurant.  I never turn down free beer, so I joined the parking lot crowd.  Thmp-Thmp brought Virgin Ivan.  He said he was trying to start running again.  You know the stupid New Year’s Resolution thing.   Good choice to pick the hash to train for a half marathon!   Pussy Galore made the trek all the way from Boulder Creek, and brought Great Barrier Queef and Virgin Leigh with her.

Whose cockamamie idea was it to lay a super shiggy trail in the dark on a wet night?  If you guessed dBASED, you would be right.  When his Co-Hare Occasional Rapist asked if they should modify their trail due to the wet conditions, he emphatically stated “No”.  Now I know why Puff calls him E-Vile and Satan!   The pack left the parking lot and initially headed right down Cabrillo College Drive (because we saw the hares go in that direction), didn’t find flour so we turned around.  There was a check on the corner of Cabrillo College drive and Rosemarie Ct.  On On was called and everyone headed up Rosemarie Ct.  It was about this time that we lost Great Barrier Queef and Virgin Leigh.  They turned around and went back to the bar.  Pussy Galore headed straight for the bar.  She said she purposely avoids all dBASED trails. 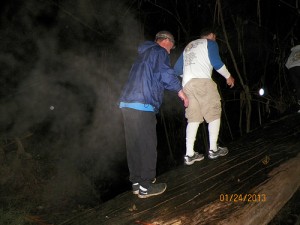 The trail headed into the woods.  It was wet and slippery and muddy, and full of poison oak.   We had to go down a steep ravine and cross a small creek, either by walking across a huge log, or by walking across the creek.  A few hashers tried the log, but then realized that it was too slippery and went through the creek.  Getting across the creek wasn’t a problem, but trying to get up the muddy hill on the other side was another story.  Just Sarah kept sliding down the hill and fell in the mud.  Welcome to the hash!  Once the pack got to the other side, we lost trail.  Schlong Division finally spotted a brown chalk arrow on a tree.  The woods connected to Cabrillo College.  The trail meandered around Cabrillo College campus, then up Perimeter Road, and into the trails in back of the college.  It was really dark in the woods and he trail seemed like it went on forever.  I didn’t think we would ever get out of there.  At least there were no wild animals and we found a bottle of liquor!  At one point there was a confusing check at an intersection and the whole pack was lost (again).   Slonad assured us that he knew where we were and would get us back to civilization before daylight.   Hashers were getting pretty hungry and thirsty too!  Turned out that Dog breath bypassed a check and thought it was a false trail and turned around.  Just when it seemed hopeless, someone yelled On On and we were back on trail.   We finally got back to a paved road, and headed down hill on Haas Road.  Trail went back through Cabrillo Campus.  Beer check was in the woods near Cabrillo College Drive and around the corner from Bangkok West.  Someone who tracked trail said it was 4.25 miles, which is classified as a death march in Surf City H3.

Religion was in the back parking lot of Bangkok West.  There was a strong stench of sewage in the air, adding to the ambiance.  Accuprick was RA.  Slonad was Beer Fairy.  After toasting the Beer Fairy, we celebrated Deep Stroke’s 50th hash and Pussy Galore’s 300th Surf City hash!  Get a life!  Next, virgins were called up.  Virgin Ivan-  Thum-Thmp made him come.  Virgin Leigh (Great Barrier Queef’s Son) said Pussy Galore made him come.  Lucky her!  Both virgins told jokes.  LAME!  There were multiple crimes on trail (as usual).  Hugh ratted out TIMMY!! for leaving his cell phone in the bar.  Luckily Hugh found it.  Dog Breath was punished for being a dumb ass.  He bypassed a check and got everybody lost in the woods.   Accuprick snared the Hare.  He was so slow that he caught the hares toward the end of trail.  Shiny Snail Trail was not present, but ranted her disgust and hatred toward dBASED in a series of text messages to Accuprick.  Back sliders- Butt Balls and Great Barrier Queef were chastised.  Deep stroke was called up for multiple down downs, too many to count and reasons that were irrelevant.  She was FRB this week.  So glad she finally won!  Cumcherto drank, but not sure why.  Schlong Division was saluted for his heroism.  He found the brown chalk on the brown tree.  Lesson to all:  USE WHITE CHALK IN THE DARK!  You can’t fucking see darker colors.  And last but not least, the Hares………………..…… 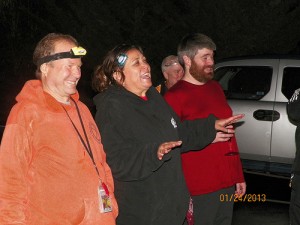 Deep Stroke closed out the hash with a soulful rendition of Swing Low.  May the hash go in peace!

See all you wankers this Thursday at Burger.  on Mission St in Santa Cruz for another episode of Surf City drunken escapades.