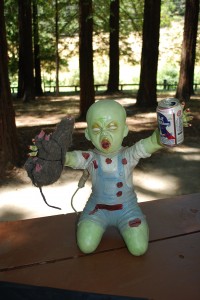 The pack convened at high noon at Delaveaga Park.  Those of us relatively newcomers to the hash were delighted to meet Bails Con Burros, the woman that has put up with Banana Basher for the past 18 years.  Broke Bench Mountain’s gal, Mass Storage Device was also there.  Dude Where’s my Trail? brought his wife Virgin Katie.  TIMMY!’s daughter Sarah showed up.  And backslider Apple Bobber also joined in the festivities.

Hasher couple dBASED and Occasional Rapist were the hare pair for the afternoon.  dBASED laid the eagle trail and Occasional Rapist laid the turkey trail.  Hashers were subjected to hilly trails with multiple hazards.  There was poison oak, yellow jackets, golf balls, and stoners throwing Frisbees.  Wildlife spotted on trail included deer, Bigfoot, and possibly a unicorn, depending on who you ask.  The pack was lucky to have made it to beer check alive.  Just as they were enjoying an ice cold beer, dBASED spotted a park ranger and yelled out “ranger danger”.  Occasional Rapist took off in a cloud of dust, claiming there was a warrant for her arrest.   The ranger threatened fines of $275 per person, but ended up letting them off.  No one knows what happened to Puff, he missed beer check.  He denied getting lost.  His excuse for being DFL was that he was old, slow and worn out.  Perhaps he mingled with the stoners, ate a few magic mushrooms and found his own trail.  Banana Basher and TIMMY! Had a feast waiting for the pack when they returned.

Banana Basher and Apple Bobber were Co-RA’s.  Last Call Norm was honored as one of the only Monterey Bay Hashers left.  In 1988 they started Wharf to Barf.  According to Norm, most of them drank too much and died off.  Next,  Thmp-Thmp and Princess Di(arrhea) brought up their “love child” Psycho Baby.  Down downs were awarded to Banana Basher’s mail order Russian bride Bails Con Burros and Lube me up Scotty since he was out partying while his wife was in China.  Horny Woman, Deep Stroke was called up for drinking out of her horn.  The band, Waxi and the Bloody Pads, were given a down down as official welcome to the hash.  Virgin Katie bored the pack with a lame joke.  Puff the Magic Drag Queen was ridiculed for being DFL.  The Watermelon competition started out with nominations TIMMY!, Deep Stroke and Puff the Magic Drag Queen.  Deep Stroke was accused of being a “racist” because she planned on running Wharf to Wharf, and replied by incriminating fellow “racists” Twat did you Say? and yours truly. The guys were off the hook.  It was between the 3 ladies.  Deliberations were made and Deep Stroke came out the winner of the Watermelon award. 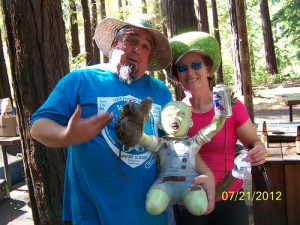 And last but not least, the Hares.  Occasional Rapist did the down downs for both of them.  dBASED was off picking up his daughter. 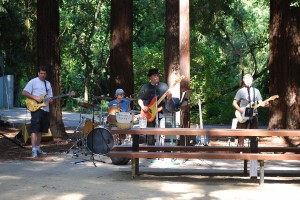 The rest of the afternoon we were entertained by the musical stylings of Waxi and the Bloody Pads.  They played a rockin set enjoyed by all.  It was a great day!