April Showers are supposed to bring May flowers. However, I contend we’ve already got Flowers, so what did April showers bring us this week? I think just cold and wet Hashers. I always like my Harriets wet, so that is not a bad thing.

Junk Puncher and I left the house at 4:30 before the hash with pre-hash business to attend to. I had not been paying too much attention to the weather and the last thing I heard was Thursday night showers. Doesn’t that mean after the sun goes down? So, I prepared for a coolish weather, but not wet weather. When Junk Puncher and I finally headed to the hash start it was full on raining. I figured, well at least hopefully this is the last wet hash for some time. I had not had the opportunity to check on final hash business and it seemed unlikely the end to remain at Seabright beach, but without intel otherwise I parked there anyway. Junk Puncher and I arrived at the Hash start, Johnny’s Harborside, moments before circle up. I have yet to be inside this establishment and the trend continues.

When circle up commenced I saw Deep Stroke wave good bye for her car. As we departed 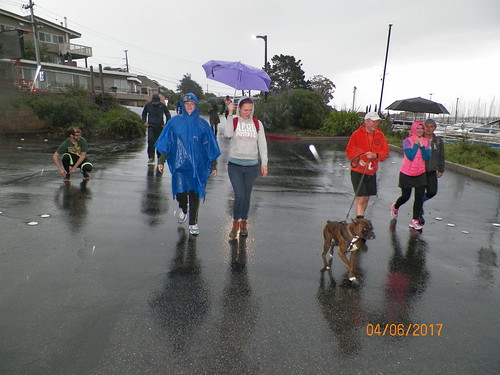 I saw Twat did you say wave goodbye too as she stayed at the bar. I imagine Wicked Retahted did the same. Circle up was largely up against the side of the building as Hashers attempted to remain dry as long as possible.

There was a barely recognizable check right by circle-up. I figured this was a bad omen. However, it turned out to be the only check that was washed out.

Trail proceeded up the West side of the harbor to a check at the North-West end. Would we take the tree over the creek once again, 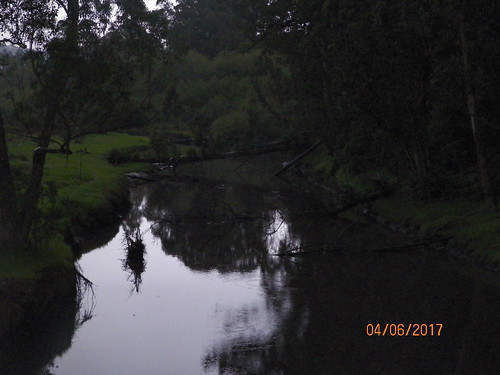 or would it be across the pedestrian/bike bridge to Arana Gulch? Bridge it was to another check at the bottom of Arana Gulch. I figured trail had to go one way or another to the outlet at Broadway. So, I ran a giant loop. As I returned from my giant loop I came up the pack still try to solve it. Well, there was only one way remaining – down the other side of the harbor, and so we went.

A check in front of Frederick Street part resulted in an on-up through Frederick Street park, then another other check as we departed the park. I figured down Frederick St and reentering the harbor. Thmp-Thmp had the same idea and I followed him about a 1/2 block behind. However, this direction provided no results and we to had to reverse course.

At this point trail headed towards Windham and past Seabright to Cayuga and another check. Apparently true trail turned left in Cayuga here. However, I proceeded straight, then left on Pine to return back to the trail and another check at the beloved five corners – the site of many checks in the past.

A final check on East Cliff and I said to myself and Junk Puncher, the beer check has got be at the San Lorenzo river overlook – and so it was. 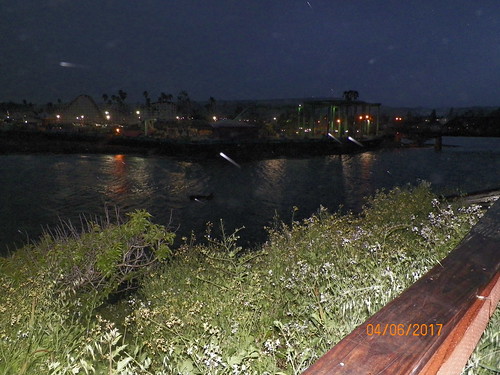 Our hares, Pink Cherry Licker and Fap Jack said the timing was excellent as they had arrived moment earlier.

After starting to turn into a Popsicle, I was glad to have my car nearby. Hugh Heffer joined me. Religion was to be held under the Glenn E Coolidge Memorial Bridge (aka Murray Street bridge), near the start. We figured it would take Hashers much longer to get back, so waited in warmth in the car for 10 minutes. As Hugh Heffer and I approached religion we saw it was going in full force. I have no idea how Hashers got there so fast!

Religion was cold because it was so windy, but at least it was not wet. I only remember 3 things there.

I know I have the Surf City Hash record for haring the Southern most Hash in La Selva Beach. I’ll contend it was also the coldest Surf City Hash. I contend I also have the record for the warmest Surf City Hash – a fateful date in Scotts Valley that is so long ago only Puff can remember it. Well, the Southern most record is going to be broken this week when Butt Balls and Little Anal Annie subject us to Virgin Hash territory at Manresa Uplands Campground. Official Operating hours there are until Sunset. Let’s hope the rangers do not come for a visit.